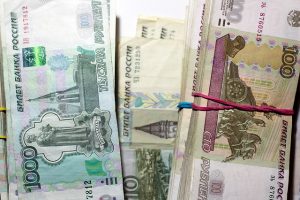 Analysts ask if China is helping Putin hide his money

One of Vladimir Putin’s long-term strategies for ensuring Russia would not be at the mercy of foreign markets and Western governments was to build huge cash reserves. These reserves, which reportedly reached more than $630 billion, were the cushion Putin counted on to tide Russia over in case of emergency.

Western sanctions were supposed to have locked up roughly half of these reserves. But as Benn Steil and Benjamin Della Rocca write in Foreign Affairs, Putin may have found a way to unlock that money, and more. All thanks to China, which may have been helping Russia hide its cash reserves for years:

It is not yet clear which intermediaries Russia would have used to stash Treasuries offshore. One strong possibility, however, is China, with which Putin now appears allied. In December 2021, at the same time that Belgium’s Treasury holdings surged by $47 billion, Russia’s central bank reported a massive $41 billion increase in its currency and deposits held at “other national central banks.” That jump dwarfed all other monthly changes in this statistic since Russia began reporting it in 2005. And the most likely recipient of those deposits is [China’s central bank] the PBOC.

The Russian central bank and sovereign wealth fund hold an estimated $140 billion in Chinese bonds—about four times the total in early 2018. Data from June 2021 also show China holding 14.2 percent of Russia’s foreign reserves, the largest share of any country. And their partnership extends well beyond the financial arena: late last year, Russia and China held a series of joint military exercises and issued joint diplomatic statements aimed at the West. It would make sense, therefore, for Russia to deposit $41 billion in renminbi or assorted currencies with the PBOC. The PBOC could have then exchanged the currencies for dollars, crediting Russia for a $41 billion deposit, and used the dollars to buy Treasuries for storage at Euroclear. Chinese President Xi Jinping, who just last week condemned Western sanctions as “harmful to all sides,” appears fully supportive of that sort of maneuvering.

There’s much more at the link.

The bottom line: “Sanctions programs that do not root out large-scale evasive money flows, however, will prove too porous to deter or reverse targeted behavior.”