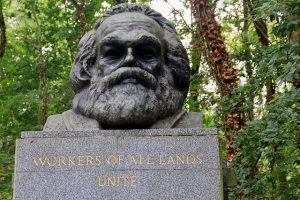 The Russian invasion of Ukraine may become a big headache for those Democratic House members who also affiliated with the Democratic Socialists of America.

The reason the DSA’s statement that, while it condemned the invasion, and carried the obligatory, and sclerotic, sign off “no war but class war,” also said this: “DSA reaffirms our call for the US to withdraw from NATO and to end the imperialist expansionism that set the stage for this conflict.”

In other words: it’s all the West’s fault.  But that was the sanitized version. The first published denunciation of the west was old school Stalinist.

And that’s got a lot of very liberal pols looking for distance, cover, and distractions. As the New York Times reported:

“I don’t agree with the D.S.A.’s stance on the U.S. exiting NATO,” said Rana Abdelhamid, a member of D.S.A. who is challenging Representative Carolyn Maloney in a New York City district that, under redistricting lines, has shed some left-wing neighborhoods. “NATO is one of the primary lines of defense that we have to address Russian aggression towards Ukraine.”

But many other New York City officials aligned with D.S.A. — some of whom have weighed in often on other national and international issues in the past — were far more circumspect.

“Thanks for reaching out, but our campaign has no comment on that,” emailed Stephen Wood, a spokesman for Brooklyn State Senate candidate David Alexis, on Wednesday.

“If you’d like to write about all electric buildings act, LLC disclosure legislation, or any of my other work as a legislator I’d be happy to talk,” Ms. Gallagher said.

All perfectly understandable, considering the times, and the stakes. And the potential for a “blame the West” message to be pure political poison in an election year that was already challenging for Democrats across the country.