Home > News > State of the Union addresses need to go 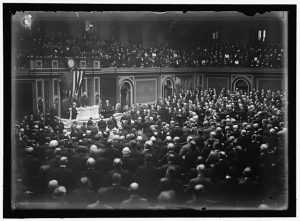 State of the Union addresses need to go

The annual spectacle of an American president reciting a speech that purports to be about the state of the country – but is really a laundry list of legislative proposals wrapped in partisan frippery – has been visited upon us.

While presidents are constitutionally required to provide an annual report to Congress, for a century, it was in report form – no personal appearance or speechifying occurred.

That changed with Woodrow Wilson, who decided to deliver the SOTU in person, and make it a political rally, rather than a required function. Wilson’s idea? To build a “personal presidency with the people.”

Sounds a bit like a personality cult. But Wilson’s vanity project has stuck with us, becoming worse over time, to the point where it’s both unwatchable, and irrelevant.

It’s the most nauseating display in American public life — and I write that as someone who has just returned from a pornographers’ convention.

It’s worse than the Oscars.

It takes real effort to be worse than the uniquely horrifying, shallow, and tone-deaf Oscars. But the SOTU has done it easily. Time to put this monstrosity back in its constitutional box, and back on paper where it started…and where it belongs.