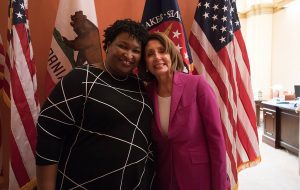 Legislation that would ban members of Congress from trading stocks is still under consideration. While the politics of such bans are easy to understand – look! Congress is cleaning up it’s own mess! – the reality is bans are very hard to enforce and even more difficult to design.

Then again…stories like this, regarding how House Speaker Nancy Pelosi’s trades have developed a retail following, only make a ban of some sort seem more likely:

Google searches for ‘Pelosi stock trades’ hit a record high earlier this month as users on social media platforms including Twitter, Reddit, Youtube and TikTok scrutinize her investments, believing the U.S. Speaker of the House may have an edge on Wall Street.

Discussion of Pelosi’s trades is a recurring theme on social media including ‘wallstreetbets’, the Reddit forum where retail investors banded together a year ago to coordinate frenzied buying of video games retailer GameStop (GME.N) and other companies, which eventually became known as meme stocks.

Trade disclosures filed by Pelosi, a multi-millionaire, are shared widely across social media soon after they appear on the House website. Companies she disclosed trades in last year include Apple (AAPL.O), Amazon , Tesla (TSLA.O) and Microsoft (MSFT.O).

Like other Congressional lawmakers, Pelosi is legally required to file disclosures of her stock trades. Her reports have garnered growing attention amid a massive uptick in retail trading – as well as recent calls to ban lawmakers from trading at all, a debate Pelosi has been pulled into in recent weeks.

The “ick” factor is pretty high here. Getting stock tips from politicians? That’s…not how any of this is supposed to work.

But the phenomenon has its roots in truth: members of Congress have unique access to inside information on policies that can directly affect stock prices. And there need to be more checks on how members trade, given the information they have. One solution? Rather than waiting 45 days for any trades to be disclosed, do it within 24 hours of a trade.

More transparency might be a way to clean up the congressional traders’ actions. After all: Sunlight is a powerful disinfectant. Even in Congress.