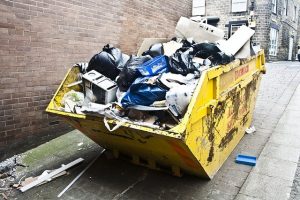 California tackles the global menace of food scraps and leftovers

California kicked off the new year with a new law requiring residents to take more time to sort their trash, making sure organic matter doesn’t go to the landfill where it can break down and create methane gas.

It’s all to save the planet, of course:

The new law means now that process will start in your home.

Every city will have a different method. Some garbage companies will have separate bins at the street, and others will ask you to simply add the pungent leftovers to the green waste bin.

But it’s not just scraps. The law mandates 20% of excess edible food from restaurants, hospitals and supermarkets be sent to food banks.

Mike Learokos started Abound Food Care a decade ago, and owns one of seven repurposing kitchens in Orange County.

“This is going to be vacuumed sealed, blast frozen, and go to one of 300 nonprofits that feed hungry people,” he said.

He says food repurposing is the new recycling.

The composting law goes into effect first day of 2022, but officials say it will take until August before the donors, nonprofits, cities and counties get it together and make this an everyday occurrence.

How any of this will be enforced is anyone’s guess. But it makes for boffo green theater.

A six figure fine for “incorrectly” parking in her own driveway

California could double its taxes