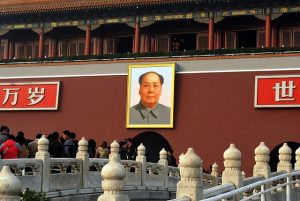 That American companies are eager to do business in China, the world’s second largest economy and most populous country, is no secret. But the lengths to which companies will bend to China’s communist regime in order to make money is increasingly absurd.

Consider the case of the long-running TV show, “The Simpsons,” now a property of Disney:

Disney launched its streaming service, Disney+, earlier in November in Hong Kong featuring an array of programming owned by the entertainment giant, including 32 seasons of the animated comedy series.

Yet one episode is missing from “The Simpsons” lineup: Titled “Goo Goo Gai Pan,” the episode from season 16 centers on a trip to China by the show’s namesake family. Along the way they encounter a plaque at Tiananmen Square in Beijing that reads: “On this site, in 1989, nothing happened.”

The episode also features a reference to the iconic “Tank Man” photo, in which a man stands in front of a column of tanks after the military moved in to crush student-led protests on June 4, 1989.

It isn’t known if Disney removed the episode under pressure, or whether it decided itself to leave the episode out of its lineup when it launched the Disney+ service in Hong Kong earlier in November.

It’s not the first time the House of Mouse has bent its knee to Beijing:

Last year, for example, Disney executives had to defend the decision to film portions of a new “Mulan” remake in Xinjiang province, where the Chinese government is believed to house work camps for members of the Uyghur minority. The controversy prompted Chinese authorities to block marketing for the film, which ended up flopping in both Chinese and U.S. theaters.

Dance with the devil if you must in order to make a buck. But do not be surprised when Old Scratch forces you to beclown yourself.