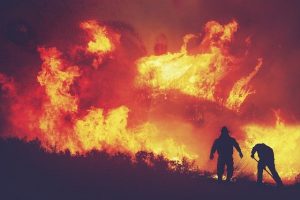 One of the more visible examples environmental activists use to bolster their argument that the globe is spiraling toward climate doom is what they say is the growing intensity and overall destruction of forest fires.

According to Bjorn Lomborg, the data behind those fires doesn’t support a spreading climate menace. Instead, Lomborg says the fires are destroying less, even with a rise in global temperatures:

In the early 1900s, about 4.2% of land world-wide burned every year…A century later, that had dropped almost to 3%. That decline has continued through the satellite era, and 2021 is likely to end with only 2.5% of the globe having caught fire, based on data through Aug. 31.

This data is entirely noncontroversial. Even a report from the World Wildlife Fund—chillingly subtitled “a crisis raging out of control?”—concedes midway through that “the area of land burned globally has actually been steadily declining since it started to be recorded in 1900.”

So what’s causing fewer parts of the globe to go up in smoke? People:

People have moved from hearths to power stations, converted untamed land into protected farms, and created enough excess wealth that societies can increasingly afford to defend our surroundings with fire suppression and forest management.

Climate studies that predict significantly more fires typically ignore this history. They model only temperature changes, excluding what people might do in response.

That’s because people adapt – quickly – to changing circumstances. But what’s driving the big headlines about fire and misery?

Hysteria and ignorance. And thousands of decisions to put homes in fire-prone areas:

The number of homes in high-fire-risk zones in the Western U.S. has increased 13-fold over the past 80 years and is set to increase further by 2050. A 2016 Nature study concludes this is true globally. “Contrary to common perception,” the researchers write, “human exposure to wildfires increases in the future mainly owing to projected population growth in areas with frequent wildfires, rather than by a general increase in burned area.”

Helping future wildfire victims has little to do with strict and expensive climate policies, and everything to do with simpler, cheaper measures like better forest management and building codes. There’s no good reason to terrify children with stories of apocalyptic firestorms.

There’s never a good reason to do that…unless stampeding perpetually edgy politicians to do something is your goal.

There’s no such thing as a free government program