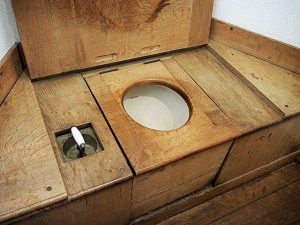 The most powerful answer and antidote to those who preach doom and destruction is human ingenuity.  People find ways to overcome challenges – always have, always will. One small example comes from researchers in South Korea:

A researcher at a university in South Korea has devised a toilet that turns human waste into power, Reuters reports. As a bonus incentive, each use rewards, uh, poopers with a small amount of digital currency that they can trade in for a coffee or a cup of noodles on campus.

The toilet first pumps your excrement into an underground tank, which means it uses less water right off the bat when compared to a traditional toilet. Microorganisms then break down the waste into methane, a usable source of energy.

In short, it’s a delightful new method of turning sewage into power.

An average person defecates about 500g a day, which can be converted to 50 litres of methane gas, the environmental engineer said. This gas can generate 0.5kWh of electricity or be used to drive a car for about 1.2km (0.75 miles).

Cho has devised a virtual currency called Ggool, which means honey in Korean. Each person using the eco-friendly toilet earns 10 Ggool a day.

Students can use the currency to buy goods on campus, from freshly brewed coffee to instant cup noodles, fruits and books. The students can pick up the products they want at a shop and scan a QR code to pay with Ggool.

It’s a small thing. It’s a weird and sort of gross thing. But this project – including its reward system – is just one more example of how we can take something as mundane as human waste and turn it into a social good.  Plus: it’s less damaging to the economy than quantitative easing and more reliable than solar cells.