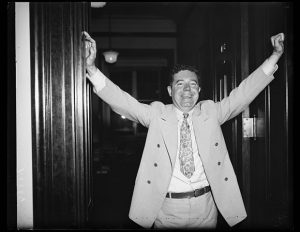 Harris & Ewing collection at the Library of Congress
News

Populism is still the rage in officials Washington and state capitals across the country. With the allure of siding with the common man against the big boys also comes a growing appreciation for the leading populists of bygone days.

Like so many populist politicians, Long rose by grabbing power through corrupt and violent means. Political opponents went missing, and some were nearly killed. Those brave enough to speak against him or his policies saw their families threatened and their livelihoods destroyed. Civil-service positions at every level of the state government were available only to those who vocally backed him, leaving would-be workers with scant political choices during the nation’s worst depression. Those lucky enough to have government jobs watched week after week as percentages of their paychecks were automatically sent to Long’s infamous “deduct box” to fund his political ambitions. When newspapers refused to print Long’s propaganda, he had the legislature establish a state printing board that could deny them “official printer” status, and started his own paper.

Throughout his time in politics, Long clearly saw himself as outside and above the law. He once declared, “I am the Constitution now,” signaling to anyone who dared question him that he was too powerful to be tamed by laws, ethics, or even basic manners. He named himself the state’s chief lawyer, drawing an additional salary for representing Louisiana in court. He appointed cronies to plush taxpayer-funded roles he created, all the while summarily removing anti-Long or Long-agnostic government officials from their posts. He bullied the state legislature, often with loyalty oaths backed by bribes and threats, to pass his desired legislation without even reading or debating it. And on the off chance the legislature wouldn’t approve his building projects, Long would simply order construction to begin, which it then did.

There’s a lot more at the link, including a warning to self-styled conservatives who think Long is a role model:

[Long] was a self-serving crook, a career politician whose progressive ideals and policies have stunted his state for nearly a century. Neither he nor his methods are worthy of admiration or replication, especially by conservatives who should have enough ethics and sense to know better.

Here’s hoping some of them still do.