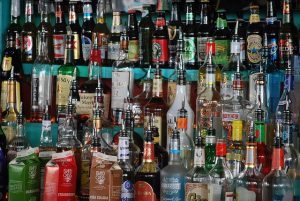 Several states maintain liquor monopolies, a holdover from the days of prohibition, when it some believed government was the best way to contain the threat of demon rum.

But even none decades after prohibition’s repeal, some states haven’t figured out how to run their monopolies. Consider the case of North Carolina, which says supply chain problems have caused a booze shortage at state-run outlets:

“We all are experiencing the supply and demand shortage, and hopefully that will resolve itself in time,” he said.

Never fear: government is on top of the situation…

The ABC commission is in constant contact with suppliers to ensure products are in stock and help local ABC boards find solutions to product issues, said commission spokesman Jeff Strickland.

“Broadly speaking, there have been strains on the global supply chains of a variety of products throughout the entire pandemic, and not just here in North Carolina,” Strickland said. “Many businesses have reopened over recent months, creating additional demand as well.”

That could be just a bunch of bureaucratic bunk. Liquor stores in neighboring South Carolina are doing business as usual…including handling more customers from North Carolina. The assistant manager of a South Carolina liquor store said they are “seeing an uptick in sales with more people headed to the lake and because of the shortage on some liquor brands in North Carolina.”

Some people come as far as Concord and Huntersville [NC], he said, to find specific spirits, including bourbons.

[Martin] said the store is placing orders ahead to be sure to have brands like Casamigos tequila and mezcal, on back order. Martin said some liquor manufacturers are having issues with trucking, staffing and finding materials to make the bottles. It’s been an issue throughout the pandemic, Martin said.

Unlike North Carolina liquor sales, which is regulated by the state, South Carolina stores can cater to customer’s tastes. “We try to get a variety of various liquors throughout the country,” Martin said.

Sounds like the bigger issue in North Carolina isn’t supply chains, but the state liquor monopoly. Time to send in the trustbusters!