Home > News > Rather than require everyone to register for the draft, abolish it 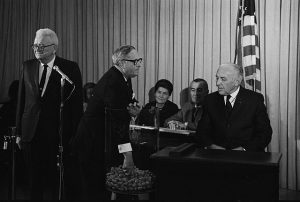 Some politicians firmly believe the state has a prior claim on an individual citizen’s time and labor. No matter what your plans may be, the government’s needs come first.

Such was long the case with the military draft, which was eliminate in the 1970. A vestige of the draft survived in the guise of the federal mandate that all males 18 and older must register with the Selective Service…or face legal consequences. There’s been a drive recently to expand this mandate to women, with the current effort getting a boostfrom Rhode Island Democratic Sen. Jack Reed:

The language proposed by Reed (D-R.I.) would expand registration for the service to “All Americans,” striking explicit references to males. It’s expected to be considered during committee markup this week; floor action on the bill would wait until later this year. A spokesperson for Reed declined to comment.

Currently, law states that U.S. men must register for the service when they turn 18 for potential military conscription, though no one has been drafted into the military in more than four decades. Men who fail to register for the draft can be fined, imprisoned or denied federal government jobs or student loans.

Calls to expand the draft to include women have grown in recent years, particularly after the Pentagon opened all combat roles to women in 2015. A congressionally-mandated commission that reviewed the draft also backed the change last year.

Rather than force all of America’s young people to submit to possible state service (or else) here’s a better idea: abolish the requirement for everyone, and then shut down the Selective Service.