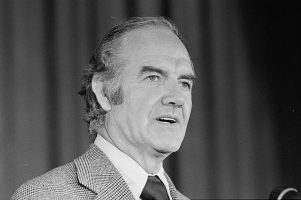 While Joe Biden frets that there may not be enough competition and government needs to ride to the rescue, there are examples of politicians more liberal than Biden who eventually saw the error of relying on the state to pick winners and losers.

One prominent example: the late Sen. George McGovern, who in 1992 wrote an op-ed in the Wall Street Journal about how “A Politician’s Dream Is a Businessman’s Nightmare.”

McGovern, the 1972 presidential nominee, wrote that after he left the Senate, he became a small business investor, “acquiring the leasehold on Connecticut’s Stratford Inn.”

In retrospect, I wish I had known more about the hazards and difficulties of such a business, especially during a recession of the kind that hit New England just as I was acquiring the inn’s 43-year leasehold. I also wish that during the years I was in public office, I had had this firsthand experience about the difficulties business people face every day. That knowledge would have made me a better U.S. senator and a more understanding presidential contender.

McGovern noted that it wasn’t just federal mandates and rules that had to be addressed each day, but a host of state and local rules, regulations and taxes that took an even greater bite out of the bottom line:

…my business associates and I also lived with federal, state and local rules that were all passed with the objective of helping employees, protecting the environment, raising tax dollars for schools, protecting our customers from fire hazards, etc. While I never have doubted the worthiness of any of these goals, the concept that most often eludes legislators is: “Can we make consumers pay the higher prices for the increased operating costs that accompany public regulation and government reporting requirements with reams of red tape.” It is a simple concern that is nonetheless often ignored by legislators.

For many lawmakers, it’s not their concern. Rather, it’s a nameless, faceless, and (supposedly) all-powerful business who can afford it all, and more.

McGovern’s Inn went bust. But the lessons it taught him endured the rest of his life:

In short, “one-size-fits-all” rules for business ignore the reality of the marketplace. And setting thresholds for regulatory guidelines at artificial levels — e.g., 50 employees or more, $500,000 in sales — takes no account of other realities, such as profit margins, labor intensive vs. capital intensive businesses, and local market economics.

Joe Biden could learn a thing or two, or three, from his one-time Senate colleague, who, unlike Biden, actually had to make a payroll.

The man who warned about inflation is wary of the future