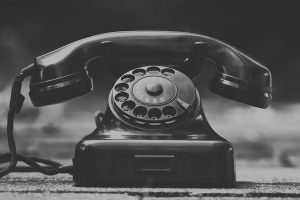 Land line telephones still exist, but the numbers are rapidly dwindling as the switch to cell phone-only communication accelerates.

It’s the marketplace in action, and it’s a good thing. Unless you happen to be a federal program – in this case, the Universal Service Fund — whose funding is tied to a tax applied to every land line phone.

To keep the fund alive, and to carry out its mission of extending broadband internet to underserved areas of the country, the poor, and other uses, the tax on those disappearing land lines has raced higher:

…the revenues against which the levy could be charged dropped to $30 billion, from about $80 billion, according to [FCC board member Brendan] Carr. That’s led to an increase in the rate of the tax, which has soared to more than 30% from 5.7% in 2000 and is typically passed along to the shrinking pool of landline users.

That’s the kind of tax increase on people of various means and backgrounds politicians are not eager to publicize. What they are very eager to do is find new sources of tax revenue to keep their Universal Service Fund alive.

Carr, [a Republican member of the FCC] in an interview, said one way to do that is by getting companies such as Amazon, Google and Netflix Inc. to pay. He cited “businesses that are benefiting from the modern network and paying virtually nothing.”

The proposal adds to Big Tech’s travails in Washington, where lawmakers and regulators are threatening to break up social media providers, and to strip them of key legal protections. Now Carr, who once called for the FCC to “do our part to rein in Big Tech,” is bidding to deepen the pain.

This passes for bold thinking in DC. But it’s just more of the same, lazy, and ultimately contradictory “get tech” thinking that has consumed Capitol Hill.

But if we assume the Universal Service Fund is worth keeping, then the National Taxpayers Union warns that taxing big tech and others is exactly the wrong approach:

Some have also called to expand the base of USF funding to technology, streaming, and internet platforms. However, such a tax would threaten to make broadband less affordable for Americans already struggling to afford it and could set back progress on closing the digital divide. This idea is sure to come up as “Big Tech” comes under fire from both parties in Congress, but a tax on broadband services is misguided. This would ultimately be paid by consumers and should be avoided as a proposal to fix the broken USF funding system. A light-touch approach to taxation and regulation is critical to keeping broadband and telecommunications affordable for more Americans.