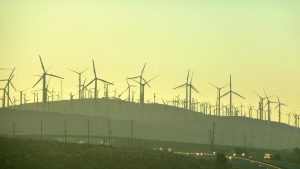 The nation’s electric companies are moving aggressively into solar and wind power, following not just consumer demand for renewable energy, but state and local mandates that require power companies to go green.

The thing about large-scale solar power facilities is they take lots of panels to generate all that electricity. And all those panels need a lot of open land. The solution: build major plants in the deserts of the U.S. southwest.

Sounds good? Not to the environmentalists fighting the new solar facilities because of the damage they will do to those wide open spaces:

Across the U.S., more than 800 utility-scale solar projects are under contract to generate nearly 70,000 megawatts of new capacity, enough to power more than 11 million homes, equivalent to Texas and then some. More than half this capacity is being planned for the American Southwest, with its abundance of sunshine and open land.

These large projects are increasingly drawing opposition from environmental activists and local residents who say they are ardent supporters of clean energy. Their objections range from a desire to keep the land unspoiled to protection for endangered species to concerns that their views would no longer be as beautiful.

Unlike past fights between polluting industries and environmentalists, this one pits people who say they want more renewable power against companies that want to generate it. It threatens to significantly slow efforts by the Biden administration and businesses to fight climate change by reducing America’s carbon emissions.

Similar fights have broken out elsewhere over wind power sites. But if people want renewable energy, there are some big trade-offs, including having wind or solar farms dotting…if not crowding…the landscape.

Of course, we could save more view sheds and desert wildlife if we were willing to fully embrace zero-carbon nuclear energy.

Sending big government after big tech is a big mistake

Cut government spending on the rich, rather than raising their taxes