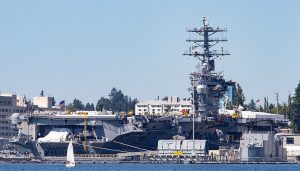 Time to Sink the Jones Act

The federal government has layers of rules and regulations that benefit the few at the expense of the many. It’s a behavior that’s sometimes called rent-seeking, a way to increase profits (thanks to the government) without actually providing any additional economic benefit.

A good example of this behavior stems from the 100 year-old Jones Act. The Cato Institute notes the Act has:

…restricted water transportation of cargo between U.S. ports to ships that are U.S.-owned, U.S.-crewed, U.S.-registered, and U.S.-built. Justified on national security grounds as a means to bolster the U.S. maritime industry, the unsurprising result of this law has been to impose significant costs on the U.S. economy while providing few of the promised benefits.

But every now and then, government decides circumstances are so dire that the Jones Act needs to be waived in order to spur the timely (and less costly) transportation of essential goods. It happened just recently during the ransomware attack on the  Colonial Pipeline.

But the exemptions remind us that the Jones Act isn’t just archaic and expensive. It’s a considerable drag on economic growth. And as Bloomberg writes, it’s long past time to sink the Act for good:

[the Jones Act’s] market-bending distortions could scarcely be exaggerated. As a direct result of the law, refineries on both coasts can find it cheaper to import foreign oil than to use domestic sources. Refineries in the Gulf Coast choose to send their products to Latin America instead of the East Coast. The U.S. may be a natural gas powerhouse, but it has no Jones Act-compliant liquefied natural gas carriers, which would cost two to three times as much as equivalent ships from South Korea. So Puerto Rico and Hawaii source their LNG from overseas, northeast ports look to Trinidad and Tobago, and U.S. natural gas goes abroad.

The act is even undermining the Biden administration’s vaunted green-energy plans. Offshore wind projects need Jones Act-compliant turbine-installation vessels. Right now, the U.S. has one — under construction, that is, and due to launch in 2023 at a cost of $500 million. Hitting the administration’s goal of 30 gigawatts of offshore wind-energy production by 2030 will require more vessels, which the law will only make more expensive.

The Jones Act is a century-old market distortion that concentrates benefits in the hands of a few at the (increasing) expense of the many. Time to sink it.