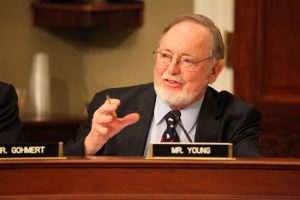 And now for a little bit of good news (hopefully) coming out of Congress.

…an individual using recreational or medicinal marijuana in legal jurisdictions can be disqualified from exercising their Second Amendment rights. When attempting to purchase a firearm, individuals must fill out U.S. Department of Justice Form 4473. Question 21 (e) requires the individual to attest that they are “not an unlawful user of, or addicted to, marijuana or any depressant, stimulant, narcotic drug, or any other controlled substance.” The form clarifies that “The use or possession of marijuana remains unlawful under Federal law regardless of whether it has been legalized or decriminalized,” potentially disqualifying individuals who use state-legal marijuana from gun ownership, or forcing them to risk perjuring themselves.

Young’s bill would create “a simple exemption for those who use marijuana in states or on tribal land where it is otherwise legal.”

Young said the “federal government has no business unduly restricting responsible citizens from exercising their rights or restricting states from listening to their constituents and reforming marijuana laws.”

This is a sensible step, and one that deserves wide support within Congress. It’s also a big test for pro-legalization Democrats who say they want to end marijuana prohibition (such as Senate majority leader Chuck Schumer)…but are very much against gun rights. At the same time, it tests prohibitionist Republicans who are staunch Second Amendment defenders.

How both groups chose to act on this bill will be highly instructive about their larger principles.