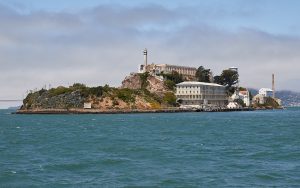 A number of public health officials and the American Medical Association argue that the nation’s prison population should be high on the priority list of people getting coronavirus vaccines:

Many prisons are chronically overcrowded, dormitory settings with shared toilets and showers. Basic hygiene is harder to uphold, making infectious disease outbreaks more likely. The risk of getting COVID-19 in prison is 5.5 times higher than for the general population, according to JAMA, the AMA’s peer-reviewed journal.

Some of the United States’ worst COVID-19 outbreaks have been in prisons, such as at California’s San Quentin state facility, where COVID-19 ripped through this summer, infecting 75% of the incarcerated population and killing 28.

“It’s a very important group, because jails and prisons have repeatedly been a focus for outbreaks of infection, not only among inmates but among people who care for them,” said Dr. William Schaffner, a professor of infectious diseases at the Vanderbilt University School of Medicine.

Colorado Gov. Jared Polis (D), however, is among those who say inmates won’t get vaccinated before other vulnerable populations:

“There’s no way that prisoners are going to get it before members of a vulnerable population. … There’s no way it’s going to go to prisoners before it goes to people who haven’t committed any crime. That’s obvious.”

In Massachusetts, inmates will get vaccinated before the general population:

Unlike most states, Massachusetts will include staff and residents of prisons and homeless shelters in phase one of vaccine distribution. As more vaccines become available, the state will also include undocumented immigrants. And it will make sure 20% of doses go to communities with the highest infection rates, based on the CDC’s Social Vulnerability Index.

The steps, recommended by the state’s vaccine advisory group, are aimed at making sure residents in communities hit hardest by COVID-19 receive a proportionate share of the vaccine.

The inmate population in the state will get vaccines before those with underlying health conditions, as well as “essential workers in day care centers, schools, transportation, grocery stores, and public health.”

Some California COVID Restrictions are About Control, not Science or Data