Home > News > The Political Fight Over the Barrett Nomination 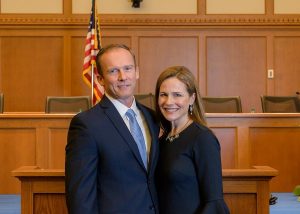 President Donald Trump’s nomination of Judge Amy Coney Barrett to the U.S. Supreme Court has, predictably, set conservatives cheering and liberals wailing. But as court nominations are, at the bottom, political affairs, let’s take a quick look at the politics of the nomination.

First, the brass knuckles politics: Senate Democrats acknowledge they don’t have the votes to block a swift confirmation. Even if Republican Sen. Susan Collins and Lisa Murkowski do not vote for Barrett, Republicans still have just enough votes to get the majority.

And, thanks to the end of the filibuster for Supreme Court nominees, delay tactics are not an option.

Second: Outside groups supporting and opposing the Barrett nomination will still be very active. Barrett’s nomination will have ample support from conservative groups who see her as a Justice in the Antonin Scalia mold (Scalia was Barrett’s mentor and former boss).

Some progressive groups are urging Democrats to boycott the Barret hearings and the final vote itself.  The goal is to undermine the legitimacy of the entire process. Other options include procedural roadblocks that could slow down the process – but not stop it.

Of bigger political concern to Democrats: their leader on the Senate Judiciary Committee is Diane Feinstein, the 87-year-old Californian whose bizarre and bigoted questioning of Barrett’s faith back in 2017 helped make the judge a star in conservative and evangelical circles.

While there’s no immediate indication Feinstein will surrender her role as top Judiciary Committee Democrat, there is another who might easily take her place: fellow California Senator and vice presidential nominee Kamala Harris.

The political angles on this nomination are still coming into focus. But they will have to sharper soon: hearings may begin as soon as Oct. 12.

Even if Swinestein steps aside, Heels Up Harris can’t fill those shoes. She doesn’t have the chops for one. Two, her prosecutorial record is a huge thumbs down. Three, throw in Harris’ adulterous relationship with Willie Brown and the pundits will eat her alive.