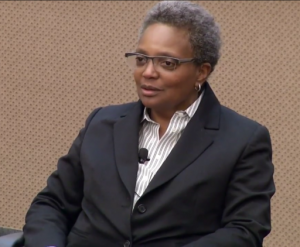 Protestors may be able to hound and harass residents and politicians in a number of cities. But at least one city block in Chicago is off-limits: the block where Mayor Lori Lightfoot lives.

According to the Chicago Tribune, police have “effectively banned protestors” from Lightfoot’s neighborhood and will arrest anyone who  “refuses to leave.”

Neighbors have dubbed the area “Fort Lori” because security measures make it “so hard to get in and out.”

Lightfoot makes no apologies for the security, saying:

“Given the threats that I have personally received. Given the threats to my home and my family, I’m gonna do everything to make sure that they are protected. I make no apologies whatsoever for that,” the mayor said.

“I’ve talked to my fellow mayors across the country and, seeing the kind of things that have been done to them and their family members, I’m not gonna have that happen. That’s not what my wife and my child signed up for. It’s not what my neighbors signed up for. We have a right in our home to live in peace.”

Police have complained that the demands of providing security for Lightfoot are compromising resources:

Second Trump Term Would Put Tax Cuts Back on the Agenda

Typical Democratic response. Protect me I am important. The rest of you need to fend for yourself.
Just like Nancy Pelosi getting her hair done AND not wearing a mask while this rest of the cities hair salons’ need to remain closed. Do as I say not as I do
This is what will happen to this country if the Democrats win the Presidency and Senate and keep the House.
NEED TO VOTE THEM OUT OF OFFICE

Ain’t she just a little bit more special than the rest of us. Go ahead SCHITCAGO, vote her in again. If you do, you DESERVE every bit of the nonsense she gives you.

Rank has its privileges and that person is about as rank as they come.

Yup! But I blame the morons who voted for ‘it’…

She’s thinking how smart she is that she has got away with everything she ever did in her life so far. The police should be thinking “call antifa, tell them the coast is clear, and walk off”.

The police should do what 2 Sheriffs of did and say no way. To be honest, if I was a city police chief in one of these cities, I wouldn’t let my members of the force even work, especially the cities that want to “defund” them. Tell the mayors, “You’re on your own”.

Lori Lightfoot: what a hypocritical zero.

is this entity male or female? I can’t make up my mind ..

She is a hypocrite, a self -serving rat.

Chicago voters put the city at risk when they elected her.

What about the citizens of Chicago being threatened every night? You do not care. I hope you get 20x karma when it does come and pay you back for what you have done. All the dead people of Chicago, their blood is on your hands. You need to be investigated. I would demand a you to be impeached.