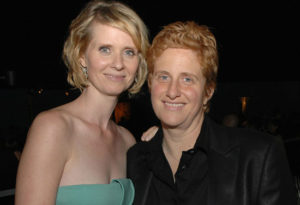 By Freedom To Marry [CC BY 2.0 (https://creativecommons.org/licenses/by/2.0)], via Wikimedia Commons
Government Overreach, News

On Wednesday, the former Sex and the City actress and New York gubernatorial candidate sat down with the New York Daily Newseditorial board to discuss the finer points of her sweeping, progressive policy agenda, which includes spending billions more on education, transit, and healthcare.

To pay for all these policies, Nixon is looking at soaking the rich. Her #fixthesubway plan would rely in part on a millionaire’s tax. The Medicare-for-all bill Nixon’s endorsed would require high income earners and their employers to spend thousands more on healthcare than they currently do. And her $7.4 billion education plan? Fat cats will be on the hook for that one, too.

For someone who has made squeezing more money out of high income earners the lynchpin of her progressive campaign, this is a shocking and telling display of ignorance. It reveals an unfounded belief—not uncommon among many on the progressive left—that all that is needed to erect a Nordic-style social welfare system is higher and more progressive income taxes.

Yet, the fact is paying for expansive healthcare and educational benefits for everyone requires taxing everyone, not just a small but wealthy slice of corporations and high-income earners. Indeed, countries like the Denmark and Sweden manage to pay for their welfare states only through higher rates of taxation applied to a very broad base of people.

Image Credit: By Freedom To Marry [CC BY 2.0 (https://creativecommons.org/licenses/by/2.0)], via Wikimedia Commons

Her “Insulationism” is showing. She would drop her JAW to go live with laid-off industrial workers in the rust belt, the Midwest. The South. New York is NOT America. It’s truly an Island, with distorted ideas of Americans, common good and progress. She should go work in a sweat shop for a year, THEN run for whatever.

Democrats and their so call candidate’s are using to might BOTOX, DRINKING TO MUCH OF THE GRAPE, OR ARE SMOKING TO MUCH WEED ! ARROGANT DEMOCRATIC PARTY needs to bow out of the 2018 Mid-Term and the 2020 PRESIDENTIAL ELECTION. THEY, have No! reason
To be in the RACE because they all ready know the Republicans have the Mid-Term and the 2020 PRESIDENTIAL ELECTION all wrapped up..