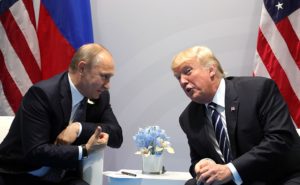 Article from CNBC by Christina Wilkie.

This was according to Sen. Rand Paul, R-Ky., who delivered the letter to Putin’s administration during a visit to Russia this week. The letter comes less than a month after Trump’s heavily criticized performance at a joint press conference with Putin in Helsinki.

I was honored to deliver a letter from President Trump to President Vladimir Putin’s administration. The letter emphasized the importance of further engagement in various areas including countering terrorism, enhancing legislative dialogue and resuming cultural exchanges.

The White House said the letter was Paul’s idea, not Trump’s. “At Senator Paul’s request, President Trump provided a letter of introduction” to Putin, deputy press secretary Hogan Gidley said in a statement Wednesday. “In the letter, the President mentioned topics of interest that Senator Paul wanted to discuss with President Putin.”

Read the entire article at CNBC.

Bernie's Socialism Gets Toppled In Primaries

This is international diplomacy at its best. The US has to at least try to triangulate and finesse Russia away from allying in any way with China, vis a vis, North Korea, Iran, trade, etc etc….and POTUS Trump is trying to do just that. Good diplomacy, in the US best interests!

I am excited about potential rapprochement with Russia. They are such an old country, filled with marvelous wonders and culture. If Russia and America were able to work together in a mutually beneficial way just think what could be accomplished. Frenemies anybody?

China BETTER honor the sanctions because if they don’t and we cut off trade with them they will go out of business in a month,,,,,to say nothing of Home Depot. Lowe’s and Harbor Freight.