Home > News > A Horrifying Example Of When Speech Isn’t Protected 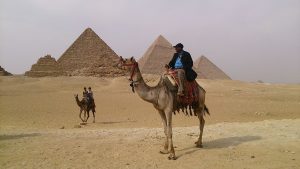 A Horrifying Example Of When Speech Isn’t Protected

Sherine Abdel-Wahab, one of Egypt’s most famous singers and the star of the Arabic version of “The Voice,” was sentenced to six months in prison after making a joke suggesting the Nile River was polluted.

A lawsuit was filed against Abdel-Wahab in November after a video captured a fan asking the singer to sing one of her popular songs, “Mashrebtesh Men Nilha,” which translates to “Have You Drunk From The Nile?”

Abdel-Wahab told the fan “drinking from the Nile will get me schistosomiasis,” referring to the common disease in Egypt that’s caused by flatworms living in freshwater.

Abdel-Wahab joked to “drink Evian instead.”

Supreme Court Continues To Refuse To Clarify The 2nd Amendment

It seems that Free Speech is only for the liberals. Ie who else can tell Jared Kushner he should wear Kevlar on his back & get away with it. While our school kids get thrown in jail and rightly so. Why should an adult get away with a threat like that. The rules are definently null & void if your a liberal. No wonder our kids think that behavior is ok.