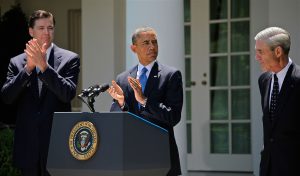 Article from Reason by Sheldon Richman.

Rather, as James Bovard writes, it “has a long record of both deceit and incompetence. Five years ago, Americans learned that the FBI was teaching its agents that ‘the FBI has the ability to bend or suspend the law to impinge on the freedom of others.’ This has practically been the Bureau’s motif since its creation in 1908…. The FBI has always used its ‘good guy’ image to keep a lid on its crimes.” (Bovard has made a vocation of cataloging the FBI’s many offenses against liberty and justice, for which we are forever in his debt.)

Things are certainly not different today. Take the case of Michael Flynn, the retired lieutenant general who spent less than a month as Donald Trump’s national-security adviser. Flynn has pleaded guilty to lying to the FBI in connection with conversations he had with Russia’s then-ambassador to the United States, Sergey Kislyak, between Trump’s election and inauguration. One need not be an admirer of Flynn—and for many reasons I certainly am not—to be disturbed by how the FBI has handled this case.

David Stockman shows that the FBI and Special Counsel Robert Mueller themselves indicate the Flynn-Kislyak conversations contained no evidence of criminal behavior.

Read the entire article in Reason.

Atlanta Is Fining Good Samaritans For Feeding The Homeless

Pro-Gun Congressman In A Battle With The NRA

Given that the FBI seemingly/supposedly flouts the law on an ongoing basis, and given that The Congress has the power and authority to control the antics of this agency, yet seems unable or unwilling to so do, exactly what is the citizenry supposed to do? This is a seriously posed question.

Trump should pardon Flynn. The Government should give him money for attorney fees. Mueller should be excused from ever working for the Government in any capacity whatsoever. There’s more!

My grandfather thoroughly believes, as I do, that Obama appointees and Obama’s abuse of surveillance power, coupled woth a Congress who could care less, has corrupted the FBI to its core. The seeds of the matter predates Obama (as it was Bush who exploded the federal government’s size and scope), but it was Obama who created the NSA blanket surveillance.

It is CRITICAL that Trump clean house in the FBI. Sacking Mueller is political suicide, though. Instead, Trump should appoint his own Special Prosecutors, one to investigate Hillary and one to probe Mueller for conflict of interest. This will force Mueller’s arrest or resignation.

Mueller should at least be required to step down from the SP chair.

At this point arresting Mueller is more likely a possibility. He has over 250 agent under him investigating “Russian interference in the Presidential Election”. However, all but one agent are hard line democrats and contributors to HRC’s campaign. We now know that the second man in charge and his wife (Ohr) worked on the documents that HRC paid 12 Million to produce to implicate Trump in a Russia scandal. Both Ohr and his wife failed to disclose as required by law.
Meanwhile Mueller knows that Clinton paid 12M to have a dossier made to accuse Trump and that there are DOZENS of connections from HRC and her campaign that lead straight back to election issues. Including the visit of the Russian Attorney to DT Junior’s office. Yet Mueller has FAILED to follow those leads.
It is VERY obvious at this point that Mueller is working for HRC and the Dems directly along with Ohr.
I would give it about a month and Mueller will be in jail along with Ohr. Ohr for perjury to the FBI…..and non-disclosure of evidence of an investigation he was active in. Mueller will be found out as a criminal…there is no other possibility. Statistically just his chosen people prove he is acting politically instead of legally. FBI is the New arm of the DNC…..the KGB owned by the Democrats

when an agent flashes a badge or other ID and says he’s with the FBI, respond with your home or personal defense weapon and shoot the badge, which to anyone not carrying one really means “First Bullet Impact ” !!!

Drain the bad in the FBI that’s if you can find any good ones get rid of them please & clean that up now. Session where are you ?????????

Drain the bad in the FBI that’s if you can find any good ones get rid of them please & clean that up now. Session where are you ?????????