Home > News > Disaster Relief Should Not Be The Government’s Responsibility 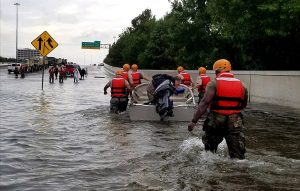 Disaster Relief Should Not Be The Government’s Responsibility

Article from Reason by John Stossel And Naomi Brockwell.

The recent hurricanes took a heavy toll. The cost of rebuilding will be significant.

Politicians from the areas hit now want tens of billions of dollars in aid.

When disaster strikes, the federal government definitely has a role because the feds control resources like the military and other first responders. After Hurricane Harvey, FEMA housed 42,000 people in 692 shelters. After Irma, 13,000 National Guard soldiers helped rescue and evacuate people. That’s the kind of emergency response we expect from the federal government.

When massive tornadoes swept through Oklahoma a few years ago, volunteers from a charity, Oklahoma Baptist Disaster Relief, used bulldozers to clear tornado debris from more than a thousand homes. The charity’s director, Sam Porter, said “I don’t think there’s any kind of disaster that can take place that the non-profit and faith-based groups cannot take care of.”

Communism Is 100 Years Old, And It Continues To Remind Us How Valuable Freedom Is

I believe that is why we purchase insurance…. to protect us..why is the government responsible to replace your damaged property

AGREED. The government is NOT responsible. Politicians do not understand and never will.

the people who live in areas that have problems due to the area should be able to take care of the problem . the government should not be the problem server homes on ocean fronts rivers etc and other mishaps being to the people who have decided to live in these areas.It is not the problem of the state , government or aid from other sources

the people who live in areas that have problems due to the area should be able to take care of the problem . the government should not be the problem server