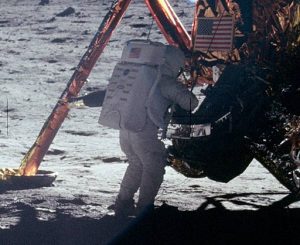 July 20 is a special day in American – and world – history: on this day in 1969, Astronauts Buzz Aldrin and Neil Armstrong walked on the moon:

When the lunar module lands at 4:17 p.m. EDT, only 30 seconds of fuel remain. Armstrong radios “Houston, Tranquility Base here. The Eagle has landed.” Mission control erupts in celebration as the tension breaks, and a controller tells the crew “You got a bunch of guys about to turn blue, we’re breathing again.”

At 10:56 p.m. EDT Armstrong is ready to plant the first human foot on another world. With more than half a billion people watching on television, he climbs down the ladder and proclaims: “That’s one small step for a man, one giant leap for mankind.”

Aldrin joins him shortly, and offers a simple but powerful description of the lunar surface: “magnificent desolation.” They explore the surface for two and a half hours, collecting samples and taking photographs.

They leave behind an American flag, a patch honoring the fallen Apollo 1 crew, and a plaque on one of Eagle’s legs. It reads, “Here men from the planet Earth first set foot upon the moon. July 1969 A.D. We came in peace for all mankind.”

NASA says it plans to return to the moon in 2024 with the Artemis project. The race to get to the moon this time, though, maybe between NASA and a series of private companies, which have set ambitious goals to get their first.

At age 66, I remember watching this on network TV. WOW! What an experience this was for the American people & the world!!