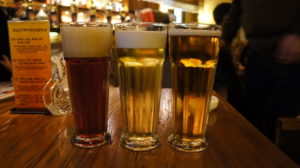 Alcohol prohibition may have officially ended in the 1930s, but prohibitionists are still with us today, and still working to rid the land of demon rum and John Barelycorn.

The prohibitionists’ latest target is restaurants serving alcohol in outdoor settings or via carry out in response to coronavirus restrictions. As Reason’s Baylen Linneken writes, government deregulation of alcohol sales has helped some restaurants survive. For the prohibitionists, even an emergency rollback of the rules is unacceptable:

Alcohol Justice is one such voice. The Marin County, California-based nonprofit, which pledges to “hold Big Alcohol accountable,” has been busy combating temporary (nevermind permanent) rollbacks of alcohol regulations…

“Cities in Marin could soon end up looking like seedy, inebriated Bourbon Street in New Orleans, under the guise of reviving patronage for a few struggling licensees” who sell booze, Alcohol Justice’s Michael Scippa argued in a Marin Independent Journal op-ed last week.

It’s an argument in control, and fear, that would have made the hatchet-wielding Carrie Nation proud.

more people that have too much time on their hands. Busy bodies trying to run other peoples lives and most likely can’t manage their own.

Drinks to go will keep the cops busy picking up body parts off the side of the highway.

More people too stupid to capitalize the first letter in a semi sentence.

Grammar lessons from the guy who brings you “You don’t even have finnish (sic) your drinks before you drive” and has Trump renting space in his head for free!

Aesop once wrote that those who do not enjoy something will deny it to others as well. That is whT Prohibition was all about and the whole shape and concept of American morals became so warped as a result that we have never recovered.

Should Cannabis be legal?

Aesop was a drunk.

That’s what I liked about the guy…

Shots and beers at the drive through window makes sense to me.
You don’t even have finnish your drinks before you drive.

Drinking and driving is what red blooded American Patriots do for fun.

When Commonsense becomes in danger species. When stupidity becomes the norm and there’s no cure in sight and the idiots who are running around without their meds or their keepers we get stupidity at it’s finest

You mean meds like caffeine, nicotine, and alcohol?
Maybe a little cannabis in the evening, just to keep the PTSD at bay, not to get high?

Did Trump enjoy watching the owner of the former Washington ‘North American Natives’ eat his words?

I think they should re-name the team” The Washington Blackfaces”…

Trump is doing what he thinks is best for his reelection.
The truth be damned.

It worked–I’m voting for him AGAIN!

Hess U R an asshole

I think Hess likes to hear himself talk. Lol. Right Hess ? He doesn’t make any sense, except to himself.

And there are still people who believe that the world is flat.

Hey Hess, everyone has a vice of some kind. Mine is working on model railroading, with the occasional glass of J.D. and Coke, and a fine bowl of premium grass. Plus learning the real history of mankind. What’s yours ? Being a communist jackass ?