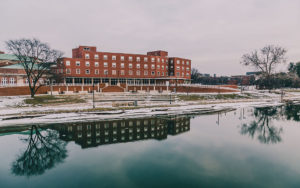 The Department of Justice (DOJ) on Monday filed a Statement of Interest in a federal lawsuit brought by a college student who says his First Amendment rights were denied.

The student, J. Michael Brown, sued his former college for stopping him from trying to spread the word about Young Americans for Liberty (YAL), a student organization with which he was involved. The Foundation for Individual Rights in Education (FIRE) filed a complaint in U.S. District Court in September on behalf of Brown.

Brown was attending Jones County Junior College (JCJC) at the time of the incident, but has since transferred to the University of Southern Mississippi. The lawsuit says that campus police stopped Brown twice from exercising his free-speech rights. The first incident involved a large inflatable beach ball, which Brown and a former JCJC student who worked for YAL called a “free speech ball.” The two men placed the ball in a large, grassy, central area of campus and encouraged students to write messages of their choosing on the ball. When students wrote on the ball, Brown and the other former student spoke to them about free speech and other civil liberties. Brown and the former student remained with the ball for about an hour and in no way impeded students from moving around the campus. The two men then started moving the ball around campus, always in places that would not impede foot traffic. When the two placed the ball near the Administration Building, a JCJC staff person told them they needed prior approval for their activity.

The second incident involved Brown and another student holding up a sign to poll others on recreational marijuana. Campus police at that time told them they couldn’t do that as they had not sought prior permission for the activity.