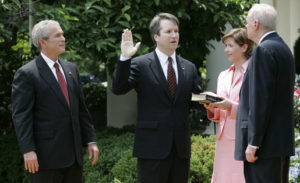 The U.S. Supreme Court narrowly upheld a law in June that, in the dissenting words of Justice Neil Gorsuch, “hand[ed] off to the nation’s chief prosecutor the power to write his own criminal code.” Today, Justice Brett Kavanaugh spoke up in support of Gorsuch.

The June ruling came in Gundy v. United States, a case that centered on a 2006 federal law known as the Sex Offender Registration and Notification Act (SORNA). Among other things, SORNA required convicted sex offenders to register, check in periodically in person, and share personal information with the authorities.

The law also contained this provision: “The Attorney General shall have the authority to specify the applicability of the requirements of this subchapter to sex offenders convicted before the enactment of this chapter.” Translation: Congress gave the attorney general a blank check when it came to dealing with the estimated 500,000 individuals whose convictions predate SORNA’s passage.

Justice Brett Kavanaugh took no part in Gundy, leaving some court watchers to wonder about how he might have ruled. The Court’s newest justice answered that question today. In a statement respecting the denial of certiorari in Paul v. United States—another separation of powers case, which the Court turned down this morning—Kavanaugh wrote in praise of “Justice Gorsuch’s scholarly analysis of the Constitution’s nondelegation doctrine” in Gundy, noting that this “thoughtful” dissent “raised important points that may warrant further consideration in future cases.”