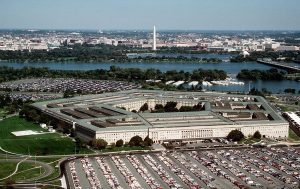 The federal government spends a disproportionate amount of its budget for outside contractors in the final month of the fiscal year, as agencies rush to blow through cash before it’s too late. Among the more noteworthy expenditures in 2018, according to the watchdog group Open the Books, was $4.6 million for lobster tail and crab.

Such use-it-or-lose-it spending stems from the fact that each federal agency is given a certain amount of money it can spend on outside contractors for the fiscal year. If the agency comes in under budget, Congress might decide to appropriate less money the following year.

Or as The Office‘s Oscar Martinez explains to Michael Scott in “The Surplus”: “Your mommy and daddy give you $10 to open up a lemonade stand, so you go out and you buy cups and you buy lemons and you buy sugar. And now you find out that it only cost you $9, so you have an extra dollar,” he explains. “So you can give that dollar back to mommy and daddy. But guess what: Next summer, and you ask them for money, they’re going to give you $9 because that’s what they think it cost to run the stand. So what you want to do is spend that dollar on something now, so that your parents think that it cost $10 to run the lemonade stand.”

Of that $544.1 billion, almost $97 billion was spent in September 2018, the final month of the fiscal year, including $53.3 billion in the final seven days of the month. That’s compared to $47 billion spent in the entire month of August. As the fiscal year came crashing to an end, bureaucrats apparently did their best to spend as much money as quickly as possible.

Fed Keep Secret Database for This

AND THEY DARE REFUSING TO HELP TRUMP TO BUILD THE WALL. DEMOCRATS LOVE SPENDING MONEY FOR THEMSELVES INSTEAD OF THE COUNTRY AND PEOPLE WHO HAVE THE STUPIDITY TO VOTE FOR THEM.

Every government philosophy from a small country town thru major cities and state govrnments.Why would anytone think different about Uncle Sam?

Why can’t they eat biscuits and gravy like every body else? It’s pretty good!!!

Civilian contractors seem to know that government contracts give them substantial rewards and profits. If I were President Trump, I would reduce the federal budget by several billion dollars of unnecessary spending levels. 4.6 Million dollars spent on lobster and crab, would feed a lot of inner city kids who go hungry on many days. But, Bureaucrats, are not going to reduce their budgets without someone forcing them to. The Office of Management and Budget should start being the watchdog we need.

If those lobster tails are going to our submarine crews … great…. if not, then we need the Gramm-Rudman act back again …. it was painful, but it worked!

This has been going on for a very long time. In the 70s I was told to use up my budget or next year I wouldn’t get as much. I cancelled a “spend the money” project and got a bad eval.

It’s a sin to be under budget /’cause next years appropriations will be cut…..what a vicious circle it is…

With the profit margins available to government contractors; the contractors themselves should be buying lobster and crab for the folks at the pentagon.

Anyone who is responsible for a government budget should personally be given a bonus percentage at the end of each year for any money returned back to the treasury. Example $4.6 million with a 1% guaranteed bonus would give the manager $46,000 and the treasury $4.554 million. Even better if they could return $1 billion. Now the bonus is $10 million and the return is $990 million. Tell me there is one manager who would not return as much as possible to the treasury every single year. Much better than lobster tails!