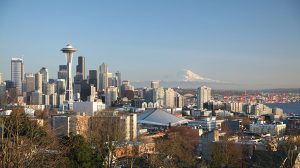 Loading up in soda? #Seattle city #sodatax is in effect. Look at what Costco wants you to know…#where can you get it without paying the tax #komonews pic.twitter.com/ZSd8V2FWeY

When Seattle’s soda tax passed in July of last year, its proponents promised that it would accomplish all good things.

Tacking on just 1.75 cents per ounce to sweetened beverages, said then-mayor Ed Murray, would not only encourage healthier consumption habits, but also generate enough revenue to subsidize trips to the farmers market, to pay for free community college, and even to roll back “white-privileged, institutional racism.”

On January 1, the tax went into full-effect, and while all those vaunted progressive goals no doubt are just over the horizon, Seattle shoppers are starting to see a more immediate effect of the tax: massive price increases.

The evidence suggests otherwise. Philadelphia implemented a 1.5-cent tax on soda in January of last year. By March, Pepsi had decided to discontinue the sale of 12-packs and 2-liter bottles in the city. It also opted to lay off some 80–100 of its workers. By August, the marketing firm Catalania found a 55 percent decline in the sale of carbonated soft drinks within the city limits—and a 38 percent jump in stores just outside of Philadelphia.

Another Failure Of Socialized Medicine Exposed

I do not drink soda and think the so called “white privilege” is nothing but whining from the feral community.

It is about CONTROL and MONEY.
Instead of realizing the mistake they made and how it hurts THEIR city, they will just start to push for surrounding cities to impose the same taxes.
LIBERALS ARE LIKE COMMUNISTS. THEY WANT COMPLETE CONTROL
Keep voting them into office and soon you will have NO freedoms left